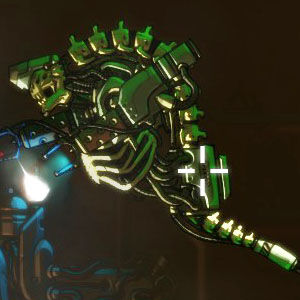 Of all enemies in the game, the Juggernaut has the most health. It's a bullet sponge that fires a succession of homing bombs at you (which do massive damage if they hit), as well as sometimes packing a heavy energy cannon.

Despite its massive health and heavy weaponry, a Juggernaut is much less dangerous if you can fight it on its own, without worrying about getting jumped by other drones. Treat it like a giant Bomber and hose it down with concentrated machine-gun fire from medium or long range: this will make the bombs detonate harmlessly far away, and the knockback effect from the machine gun will keep the Juggernaut from advancing towards you. If you've got a Chain Gun and some elbow room it's trivial to defeat.

Or, as always, just run away. You get paid to salvage vessels, not kill drones.